At long last, the intricacies of the nefarious Cthulhu cult are revealed! 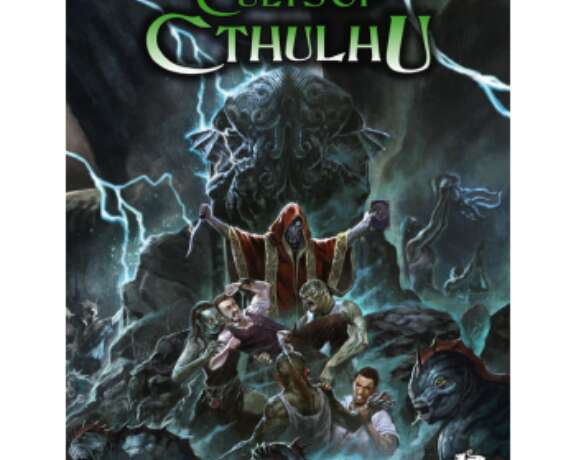 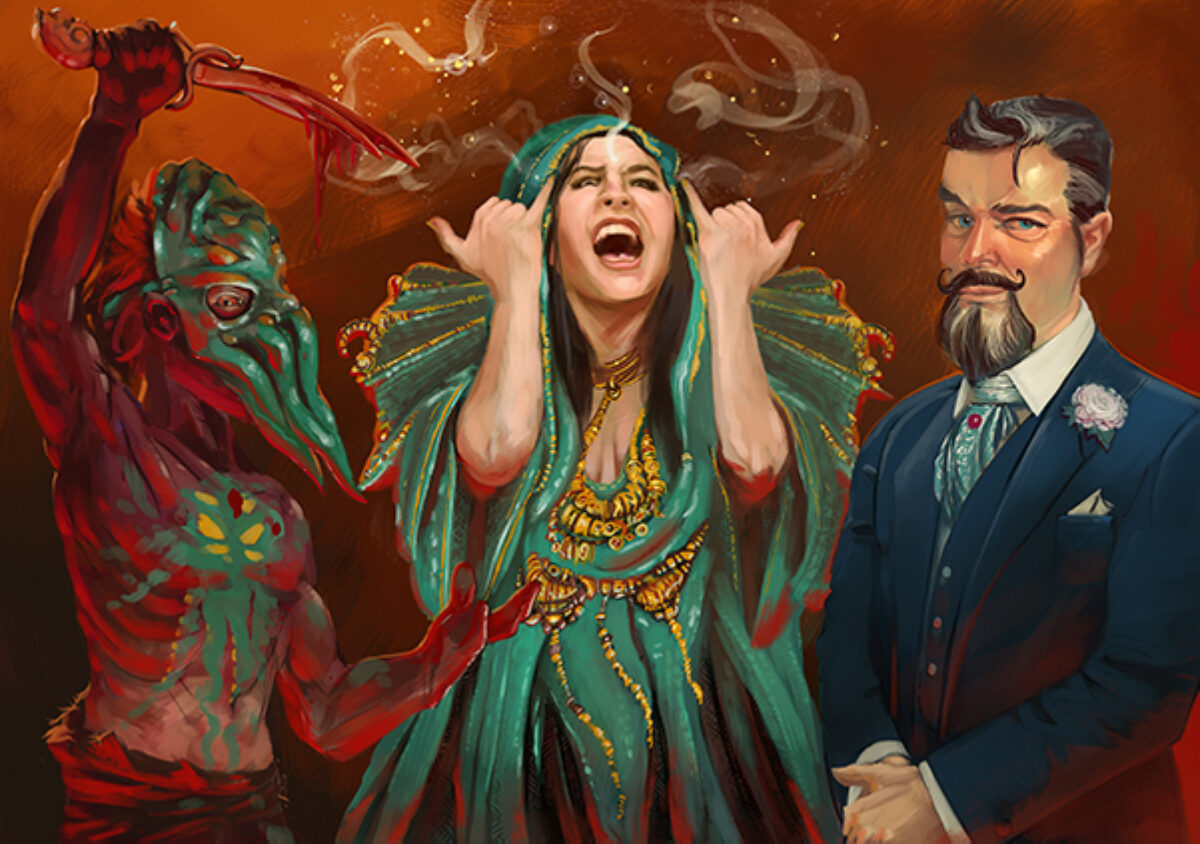 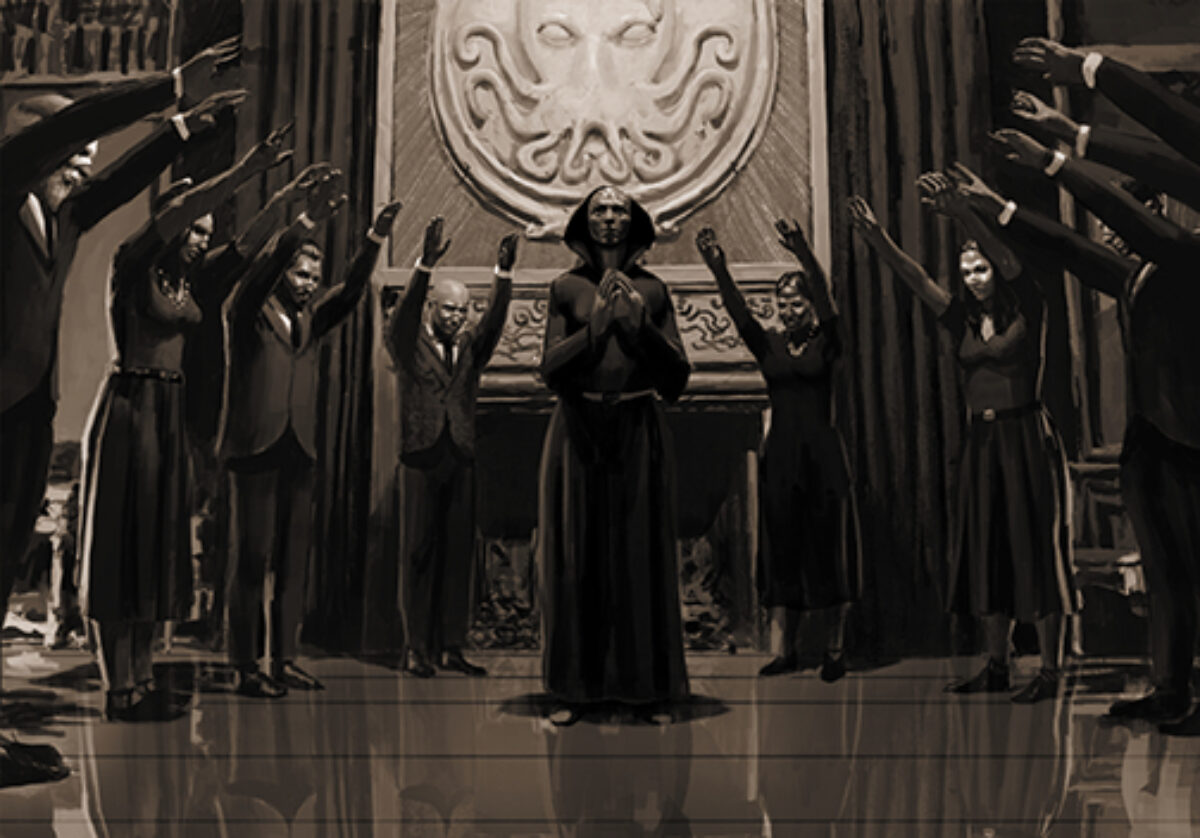 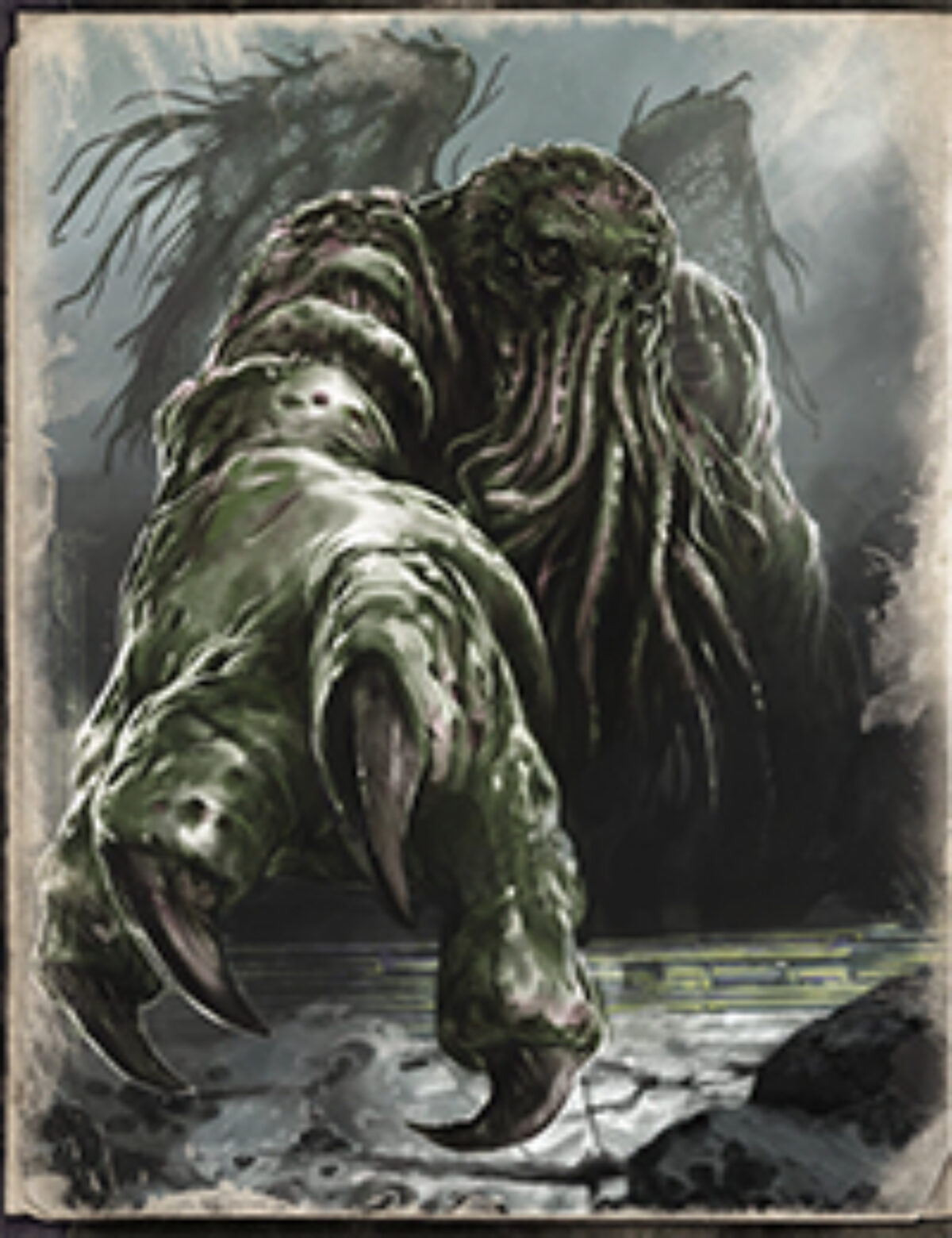 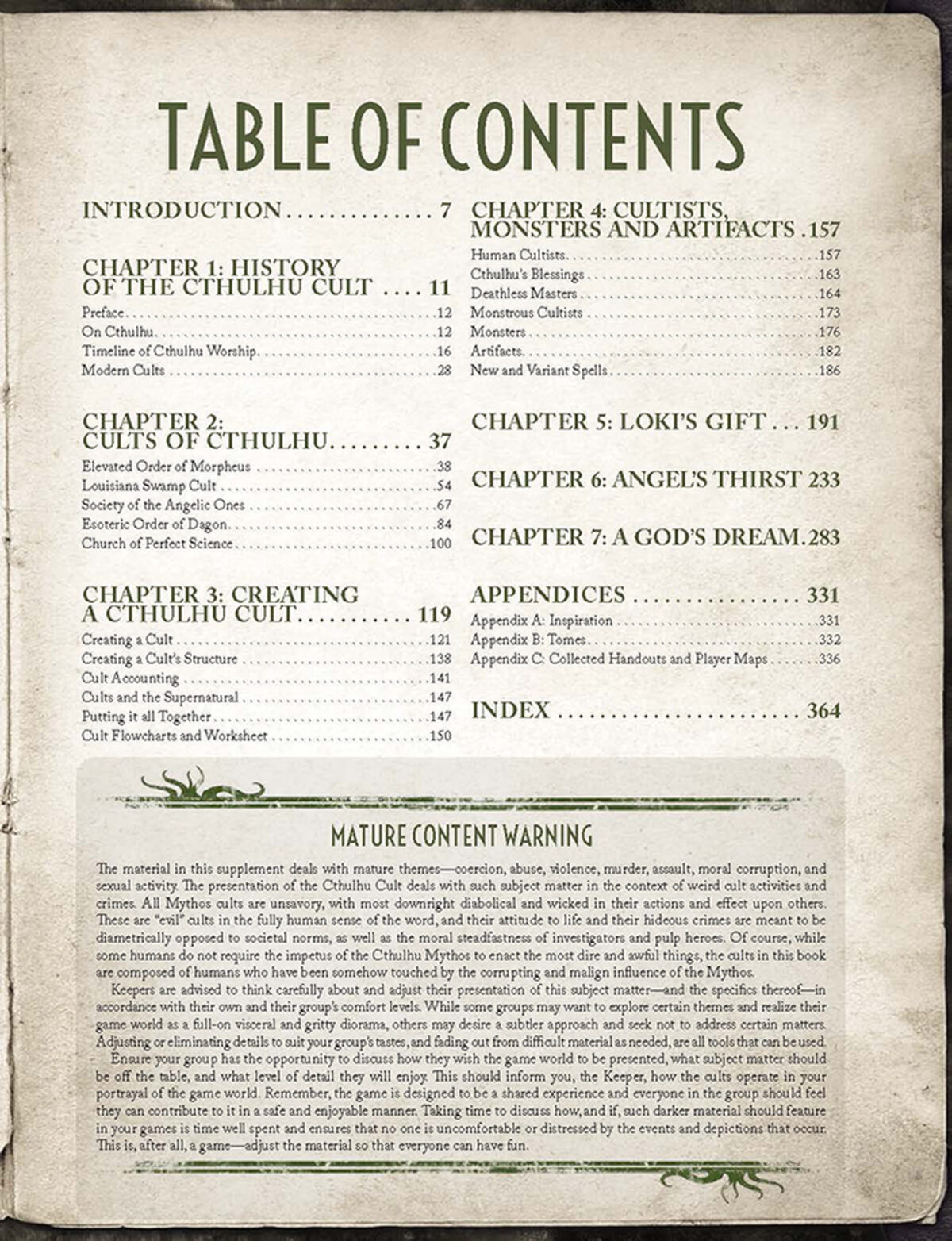 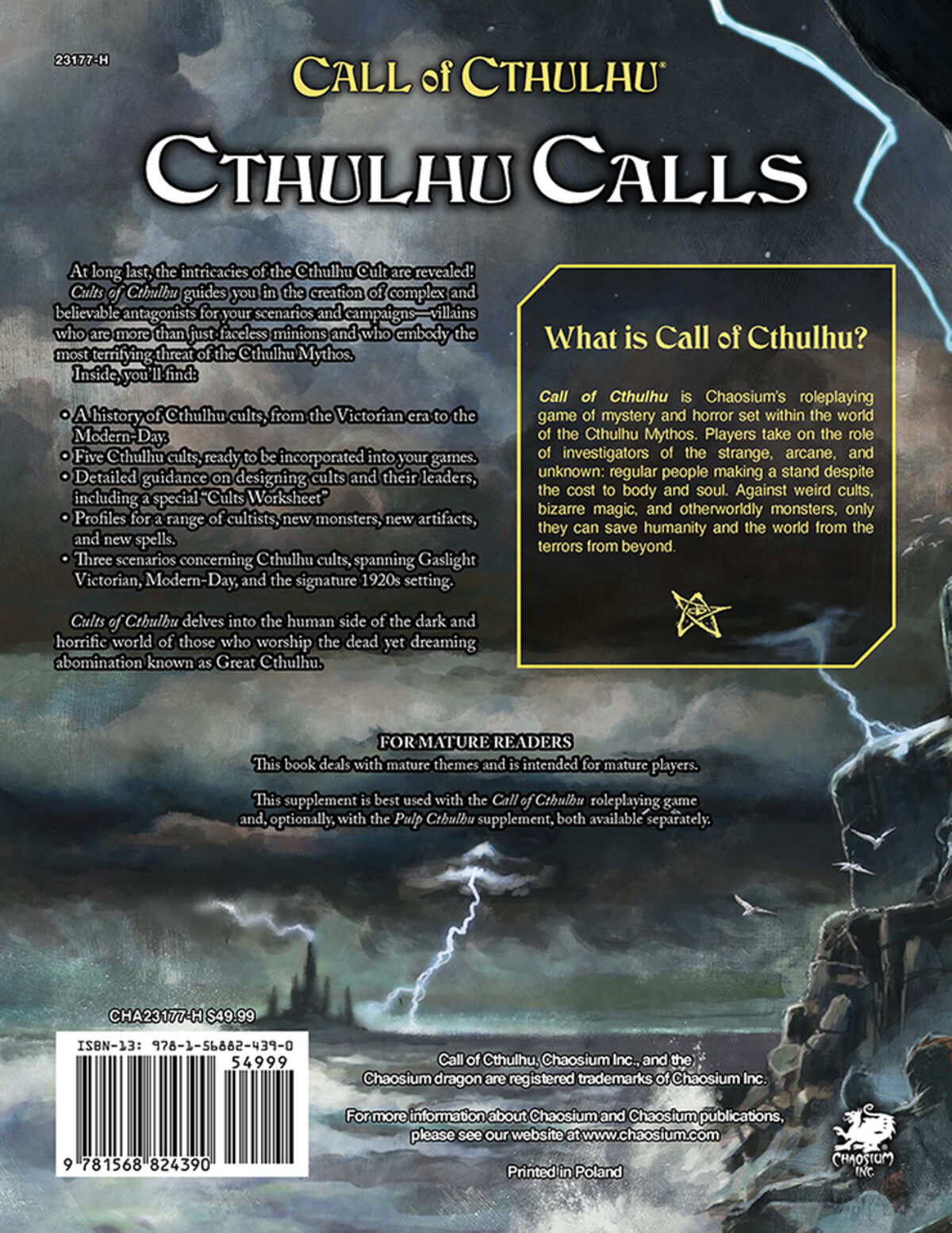 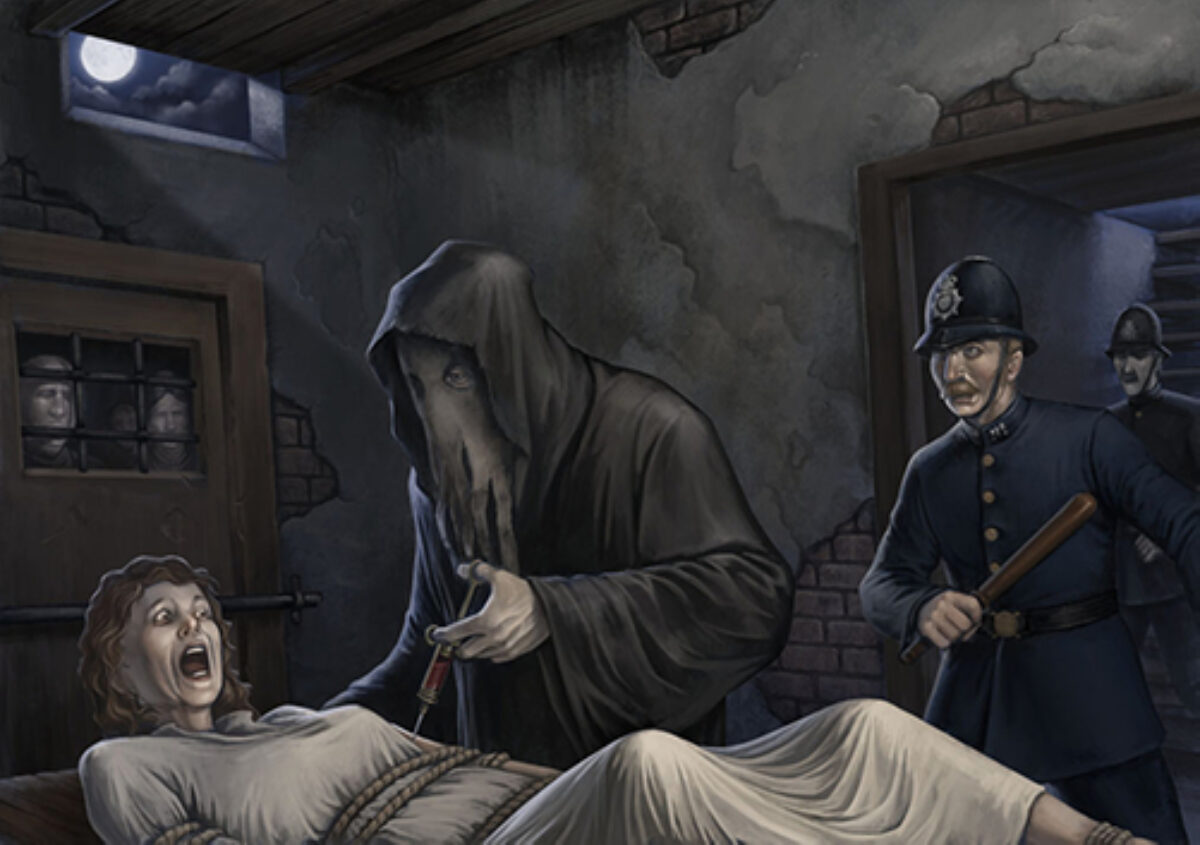 Secrets of the Cthulhu Cult

Cults of Cthulhu delves into the human side of the dark and horrific world of those who worship the dead yet dreaming abomination known as Great Cthulhu. Here, twisted humans try to find meaning in a hopeless universe, and seek purpose in their fleeting and insignificant lives. This is the world of the Cthulhu Cult and those who hear its master’s dark call.

In Call of Cthulhu there are many who serve the alien forces of the universe and seek to trade favor for power. But, there is one insidious cult that rises above the rest. One that has secretly permeated human civilization since before human civilization even existed: the Cthulhu Cult. From the history of its varied forms through to its notable personalities, this sourcebook presents not only ready to use Cthulhu cults but also advice on designing unique cults to trouble your investigators in your games and campaigns.

Herein, a horrific doorway is thrown open. Inside, the intricacies of Cthulhu cults and their varying permutations are explored in depth. As a Keeper, writer, or storyteller, this book can be used as a tool to help inspire you to expand and create something totally new, but still rooted in the twisted brambles and sunken seaweed of the Cthulhu Mythos.

Cults of Cthulhu guides you in the creation of complex and believable antagonists for your scenarios and campaigns—villains who are more than just faceless, robed minions and who perhaps embody the most terrifying threat in all of the Mythos.

•A history of Cthulhu cults.

•Five fully fleshed out Cthulhu cults, ready to be incorporated into games.

•Covering the Victorian era through to the Modern-Day.

•Never before seen secrets of the Deathless Masters.

•Detailed guidance on designing cults and their leaders for campaigns.

•Profiles for a wide range of cultists, new Cthulhu-connected monsters, artifacts, and spells.

•Three scenarios covering Cthulhu by Gaslight, the Roaring Twenties, and the Modern-Day.

This book deals with mature themes and is intended for mature players.

This supplement is best used with the Call of Cthulhu roleplaying game and, optionally, with the Pulp Cthulhu supplement, both available separately.

Chapter 1: History of the Cthulhu Cult, a collection of historical accounts of events possibly connected to the worship of Great Cthulhu. From the 1920s research of Mildred Schwartz through to the modern age information gathered by David Eberhart, a documentary film student.

Chapter 2: Cults of Cthulhu, a detailed look at five Cthulhu cults from different periods in history. Each explores the history, beliefs, and social structure of the differing cults, as well as detailing their leaders and key members, along with possible plot and story ideas.

•The Elevated Order of Morpheus: 1890s London, where the wealthy and elite are not satisfied with mundane power and influence.

•The Louisiana Swamp Cult: a brutal Cthulhu cult disbanded by Inspector Legrasse in the swamps just outside of New Orleans in 1907.

•The Society of the Angelic Ones: a cult thriving in 1920s Los Angeles, preying on those that came west chasing the California dream, only to be left hopeless and desperate.

•The Esoteric Order of Dagon: a look into the Innsmouth cult, where serving Cthulhu is only part of a far greater plan.

•The Church of the Perfect Science: a modern-day cult that uses psychology and technology to prepare humanity for the coming of Great Cthulhu.

Chapter 3: Creating a Cthulhu Cult, the nitty-gritty of creating your own Cthulhu cult, providing details about what makes a Cthulhu cult different from other types of Mythos cults, as well as going into organizational structures. Provides a step-by-step process for designing a cult from the ground up, looking deep into aspects such as financing, recruitment, and organization. Advice for creating a cult leader, arguably, the linchpin of any cult, is included. Three example cults are included to demonstrate the method as well as offer inspiration.

Chapter 4: Cultists, Monsters, and Artifacts, provides resources for Keepers, including profiles for a wide range of generic cultists, as well as monstrous followers and allied alien creatures. In depth analysis about the Deathless Masters, and guidance on how to create these undying masters. This chapter also details new supernatural artifacts, and new spells to cause investigators nightmares.

Chapters 5 to 7: Scenarios, a collection of three adventures, set in different time periods and locations. Each provides the basis for expanded play and can be used to set up new campaigns. You can play these scenarios as separate adventures or link them together to paint a much broader picture of the Cthulhu Cult across both time and the world. While structured to take place in differing eras, the scenarios can be adjusted to allow play in a single time period, be it the 1920s–1930s or the modern-day.

•Loki’s Gift: 1890s London, the investigators must look into the death of a talented young musician who seemingly committed suicide. This scenario explores the darker side of the arts and music, reflecting the ills of society back onto the investigators.

•The Angel’s Thirst: 1920s Los Angeles, the investigators are hired by a young woman whose taxi-driving father has gone missing. This scenario delves into the power of religion, community, and the family, and how things get twisted to serve a dark purpose.

•A God’s Dream: set in 2021, the investigators must track down a friend in the heart of Chicago. This adventure looks at how technology can aid a cult—granting wealth and corporate influence to potentially awaken the Great Old Ones.

Soulmist : A Journey from Darkness to Light